Once that decision was made, the next big question was how.  We have two energy-filled cats, Figaro and Cleo, who's entire life had been spent in our 1200 foot condo.  After much debate on flying, finding short-term surrogate cat parents, or driving, we decided we would drive and we went on a search for suitable trailers.

After looking at a traditional RV store, we didn't come across anything that quite fit our needs.  We needed something small that we could tow behind our car, something with air conditioner if we wanted to leave the cats during the day, and something that would be comfortable for us to sleep in with our furry friends.

And that's when we found her.  Our 1969 Shasta Lo Flyte that had been partially rebuilt.  We aptly renamed her Buttercup.  We worked on outfitting her for the trip.  Ernest put in battery packs and a solar hookup for some power options, made a table, and put a cat door under the bed so we could stow away the litter box.  We also added a few homey touches with fresh paint and decor.   The whole process took several months.

Meanwhile, we were selling most of our earthly goods and trying to downsize as much as we could before the big move.  We sold furniture, boats, motorcycles, cars, and weeded out our clothes.  Saying goodbye to "stuff" can be hard.  It's amazing how much you can amass in just a few years!

We tried introducing the cats to their new home with mixed reviews.  Figaro became curious (and we incidentally discovered he has a love of getting dirty, rolling in sawdust from all our Buttercup projects) while we couldn't even get Cleo out the door of the house.  Cleo would bolt across the house to hide under the bed or in the closet if she heard the door to the garage open.

Our plan was to train the cats to walk on leashes.  We purchased some cat harnesses, but they learned quickly to run and hide the second they saw the harness come out.  We knew we were going to be in for a challenge.


Moving day finally came.  We had movers pack our big stuff and sent that on it's way to Anchorage, while we packed Buttercup with our camping gear and loaded up our car with kayaks, ready to hit the road.  The night before we left we had a beautiful going away dinner with our Knoxville friends and family.  While it's never easy to say goodbye, we were excited for the adventure ahead.  And, as they say, we'll be back. 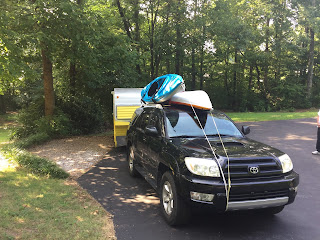 Embarking, Corn, and Cheez Whiz...Oh My!