Embarking, Corn, and Cheez Whiz...Oh My!

Alas, it was upon us.  Time to embark on our journey.  Our first chore was loading up the cats...who by all means wanted nothing to do with the forthcoming adventure.  We put two large carriers in the back of the car, so they each had their own cat habitat.  We loaded the carriers up with their favorite toys, beds, and scratching posts.  They had never traveled in a car before short of their yearly visit to the vet so a road trip to Alaska was a litttttle bit outside their norm.


Figaro, who is usually more easy going, was NOT excited about being loaded into his carrier.  Cleo, who is by all means afraid of planet earth, wouldn't even allow us to carry her from the garage to the car, a distance of MAYBE 20 feet.  We had to put her in a small cat carrier in the house to transfer her to the carrier in the car.  So after loading them up (with a little bit of hissing and general disgruntledness involved), we waved our final goodbye and headed out from Knoxville.

And made it several miles to Walmart.

The cats were so intensely scared and unhappy with moving day after the first 10 miles that we made a quick run through the cat aisle, bulking up on cat beds and toys to try to make the journey more comfortable for them (and consequently us).  After buying out anything that looked like it might help calm the cats, we took off again, this time REALLY leaving Knoxville.  Our cat supplies were to very little avail; they remained very verbal about their discontent the whole day.

We made it to Rend Lake, Illinois that evening.  We spent the night at Wayne Fitzgerrel State Park which was a beautiful state park with nice wooded campsites, long bike trails, and water access to the lake.  Figaro was excited when he was able to get out of the car and went dashing for the bushes...which happened to be full of stickies (my botanically correct term).  He got covered in stickies as did I when I had to retrieve him from the thick underbrush.  We were pulling stickies out of him (and me) for days.  Cleo on the other had was not interested in the great outdoors and bolted under the bed.  We didn't see her much the rest of the evening.

The first night was a good trial run with Buttercup.  We gave some of our new toys a go.  We got to use our new Coleman grill, which worked well.  A few things took some figuring out...such as how to do the dishes and how to avoid bug bites (some of which are still plaguing us weeks later).  Overall we considered it a success.

The next morning, we continued on our way north.  I spent a lot of time in the car studying for my medical boards (Argh!) while Ernest listened to Podcasts about everything.  The cats continued to seem terrified on the second day, particularly Figaro.  Cleo would quickly retreat for her bed, where she wouldn't make a peep the whole journey, while Figaro paced, meowed, pawed, scratched and remained in a general state of chaos.  It occurred to Ernest that once upon a time the vet gave him Cheez Whiz to distract him from a shot.  He was a huge fan at the time and didn't even realize he had received a shot.  We figured it was worth a try and went with some good ol' fashioned Cheese Wow (the Walmart version of Cheez Whiz).  And it turns out he absolutely LOVES Cheez Wow.  It seemed to calm him down immediately, and he would go take a nap after getting his Cheez Wow fix.  Brilliant.

We spent our second night in Saint Joseph, MO and continued our way up.  We were getting so many comments on Buttercup and our setup along the way that we put our Instagram name @therumriver on the back of Buttercup so people could follow our journey.  As we were driving through Nebraska, some locals messaged us that were were minutes away from the city known as the ice cream capital of the world!  I have been known to like ice cream, so we figured this merited a stop.

Le Mars, Iowa is the home of Blue Bunny ice cream and is known as the ice cream capital of the world.  They have a huge ice cream parlor downtown with a nice gift shop.  Our ice cream was the perfect touch to the 100 degree day.

We continued our drive through South Dakota with cornfield after cornfield. The drive was really pretty.  We ended up in Mitchell, SD that evening.  Mitchell is home of the home of the Corn Palace, a large arena that is decorated in murals made out of corn!  They change the murals every year and have different colors of corn involved in their murals.  There is some strict quality control going on to make sure the corn in the right color for the murals.  A number of artists help create the elaborate murals and assemble them every year.  I have to say, we had never seen anything quite like the Corn Palace and it was pretty entertaining.  They had a huge gift shop where you could buy anything corn-themed you could think of.

The first few days went pretty smoothly, especially after figuring out how to calm the cats.  We were thankful that Buttercup's air conditioner worked pretty well because it was HOT.  We logged about 1600 miles.  The trailer didn't explode, we kayaks stayed attached to the top of the car, and we didn't lose any cats.  Success! 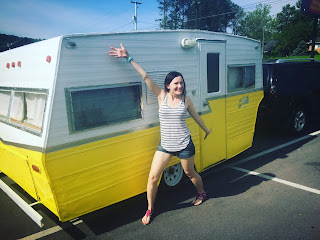